I think this would be one of my “desert island’ dishes. Put everything down and make it NOW! 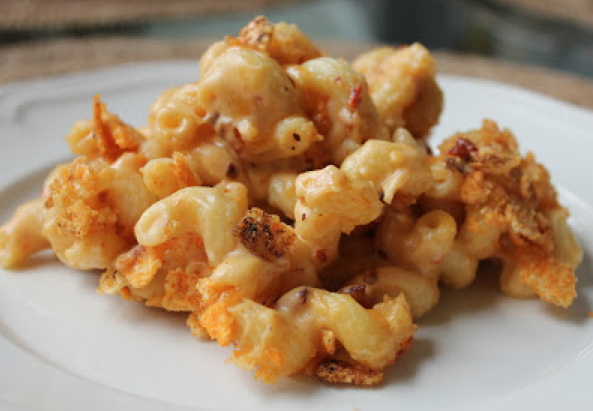 8 oz bacon rashers
1lb Cavatappi pasta
1/2 cup unsalted butter
1/2 cup flour
2 1/2 cups 2% (or low fat) milk
1/2 cup half and half
3 cups grated cheddar cheese, divided. (It’s nice to use a blend of half mild and half sharp cheddar)
4 slices American cheese (I never thought I would ever put this sort of cheese in a dish! LOL)
3 chipotle peppers in adobo sauce, chopped
2 tbsp adobo sauce (from the chipotle pepper can)
3 oz BBQ potato chips, crumbled

Cook the bacon in a large skillet until crispy, about 10 minutes. Transfer it to a paper towel-lined plate to drain. When it’s cool, crumble the bacon into small pieces and set aside.
Cook the cavatappi pasta in boiling, salted water for about 6 minutes. It should be al dente. Strain the pasta and run it under cold water to stop the cooking and prevent it from sticking.
Preheat the oven to 400 F

Now to the cheese sauce.
Melt the butter in a large saucepan over medium heat. When melted, whisk in the flour. Whisking constantly, allow the mixture to cook gently for about 3 minutes, until golden and bubbly. Slowly add the milk and half and half and allow it to simmer, whisking constantly until thickened. This can take some time, say, 8 to 10 minutes until it can coat the back of a spoon.
Reduce the heat to low and slowly mix in 2 cups of the cheddar cheese and the American cheese.
When all the cheese is incorporated, mix in the chopped chiotles, adobo sauce and crumbled bacon.
Add the cavatappi pasta to the cheese sauce and mix until the pasta is well coated.
Pour the mac and cheese into a baking dish and top it with the remaining grated cheddar and the crumbled BBQ potato chips.
Transfer the dish to the oven and bake for 20 to 30 minutes until all the cheese is melted and it’s bubbly and golden.
ENJOY!